Getting older and hormones

I blogged a bit about hormones last month.  I thought I would talk a bit about my 2015 in case anything I am going through helps anyone out there. 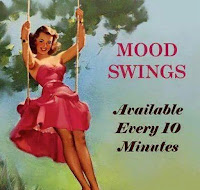 This year started off with me getting my thyroid checked. I was so tired beyond belief and just didn't feel great.  I had a respiratory infection the month before so My mother is always on me about that and when I just couldn't seem to stay awake among all of the other stuff, I figured I should check it out. My thyroid ended up being completely fine as well as everything else checked.  So I moved on to seeing my GYN because of the basically continuous monthly visitor and seeing if that could be it. YES, I know TMI.  I guess I should rewind a little and say that the previous few years had me trying pill after pill to find something to get things under control. I have endometriosis, I had irregular periods, I have migraines, I get horrible cystic acne, I had the most miserable time with my periods - something has to get it all under control so I can function.

Because we live in a world where we don't fix the cause, we fix the effect it was suggested that I try going on the pill again.  I have probably taken every birth control pill ever made to try and help my issues in my menstruating career.  At that time (this is in February) my cycle seemed to be every few weeks, I just couldn't take it and wanted it to stop.  So I had the ablation procedure done. Let me tell you, that appointment before the procedure where they stick the filled balloon up there is not pleasant.  Then if there is a polyp they need to check out - holy crap. I did that leg of the procedure on St. Patrick's Day. That's when you know you are an adult. When you are chugging water for a clear ultrasound instead of chugging green beer. Oh how I wished it was a green beer sort of day.  I was not prepared for that pain.

When I got the ablation procedure done (on Good Friday because apparently I have to do this stuff on holidays), I had developed a cough because of a sinus thing and that made that recovery MISERABLE.  Being sore and constantly coughing does not help with recovery so keep that in mind.  I will tell you that I wished I had that procedure done years ago.  My period was gone and so were most of my cramps.  I didn't even have a migraine for a few months.  It was like magic.  I still had crankiness, bloat, some cramps (stabbing in the ovary area), some brain fog, etc.  It seemed like I was still on this every few week cycle and the feelings progressively got worse and the migraines were back and the cystic acne seemed like it was never healing in between break outs.

In September I went in to see my Primary because I woke up to having my face swollen. It was totally a Sloth from the Goonies moment.  I assumed it was some sort of allergic reaction but since I didn't eat anything different or do anything differently I didn't know what to do and two mornings I woke up like that so I was afraid to see what I would look up the third morning.  I told the nurse and him all about my hormonal issues and asked if there was a way if that was connected.  The Dr basically said my body could not handle my seasonal allergies and I was to take three different medicines to take care of it and was suggested that I get some acne face wash.  This basically was another instance of treating the effect instead of the cause.  Did you know that your hormones can effect your allergies?

I decided to then make an appointment with my GYN again because it just felt like my body was so out of control.  I printed out a year calendar and I went through all of my texts, emails, and chats and searched for words where I crabbed about how I was feeling.  Once I mapped them all out and could see that I was almost exactly on a two week cycle where I had a good week and then a bad week it really clicked. I kept saying I was on a two week cycle but I just was saying it as a generalization rather than that being exactly the case.  I am at the doorstep of the age where "the change" could start happening.  I have always had issues but MAN this has been the worst.  Could this be it?  I mean I was moody, cranky, crabby, tired beyond belief, crying all the time over nothing, migraines, bloated, hot flashes that were just ridiculous...could it be?

Finally I had my appointment.  Got out my chart and talked with my GYN.  Of course the pill was brought up again and after I started crying (because hormones) she then said there was something else she could suggest but it depended on how "out there" I wanted to go.  "Out there?" What does that even mean?  I said "LET'S DO IT" because I had to do something else.  Try something else.

Yeah, she gave me the number to a compound pharmacist who will mix up something especially for me based on my symptoms, test results, age, and etc.  Not pre-packaged pills to try for three months and then when they don't work switch to something else but something made just for me for my hormone levels.  Bio-Identical Hormone Therapy. WHAT?  Why couldn't I be pushed to this before? I have been going to this GYN for  like  30 years.  They know my history.  It is obvious things weren't quite right. Why are we in this world where it is just "here, take this" to cover the problem rather than fix it?

I made the appointment and met with the pharmacist the next week.  It was a 90 minute appointment where he went over everything.  He questioned me on all of my symptoms.  Everything I was feeling he asked about.  This is his specialty and he knows what he is doing.  I even said at one point that I just feel so crazy and he tells me "People are born crazy, you just have some hormones out of order" I totally wanted to hug that man.  That day I went home with my saliva test kit feeling so much better about everything even though I cried all the way home.  I was to do my testing a few days before I would feel the worst.  If I had periods it would be so much easier to predict when that day was.

I don't understand why this is considered "out there" and why it is a last resort instead of "let's get your hormones in order!"   I guess this is all because of the big business of insurance and pharmaceutical companies.
So that next week I did my testing throughout the day and shipped that test kit off.  That's where I am at right now.  Just waiting on the results to get back to the pharmacist and a plan to worked out for me.  In the meantime last week was my good week, this morning my cystic acne made my face look like the surface of the moon and this evening I started crying for no reason.  Tomorrow at work I will struggle with turning thoughts into words and will probably sweat to death and want to jump in the river all while trying to act and appear normal.

Hopefully soon I will get to blog about the results and what happens next.  I have mixed feelings - part of me hopes that everything is corrected and I feel better than I ever have in my entire life, but then there is the part that will be so sad of all the time wasted for no reason.  All of the sick days, all of the sleeping, all of the being depressed and frustrated over not feeling well....sigh.
Posted by Brain Blobs and Verbal Vomit at 8:53 PM 0 comments