My brief time with online dating

My thoughts were that I should try online dating because if I always hang out with the same people and do the same things then how would I meet someone out of my circle?  I wouldn't ever meet anyone new if I didn't venture out somehow.

I consulted with a friend of mine that had some experience with several of the popular dating sites.  He told me NOT to use Plenty of Fish because it was free and full of garbage. Well, I didn't listen. I looked on that one as well as the others. I didn't plunk down any money on any of the sites and in poking around, I found that some of the same people on the paid sites were using POF where you can contact people for free.  Seems like the strategy for all of us cheap single people is set up profiles on other sites the same so people can contact you for free on the POF.

In browsing to see what was out there for me, I noticed so many had OLD pictures.  Photos with dates on them that were 5-10 years old.  I get it, we all love to reminisce and think about when we were younger and looked great...but what do you think is going to happen on that first date when she is still looking for her date to show up and what looks like that dude's older brother is standing in front of her?

Not only were there old photos to sift through...but then there were things like the following 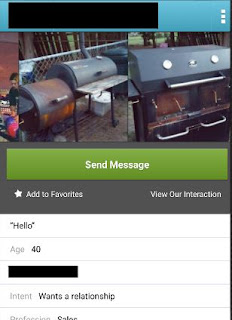 Yep, this guy that wants a relationship has TWO photos of BBQ grills among his profile pictures.  Better choice would be to write in the profile "I really enjoy cooking and would love to cook for you" 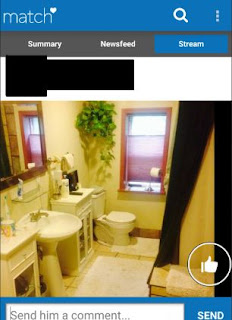 This guy is proud of his bathroom.  Does there need to be a photo in his profile pictures? NOPE.  Why not write in the profile that you are neat and tidy? 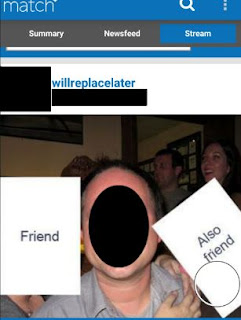 There are lots like this guy also.  A guy that most likely has a camera on his phone but would rather take a photo and take the time to use some editing program to make sure that you know these are friends. 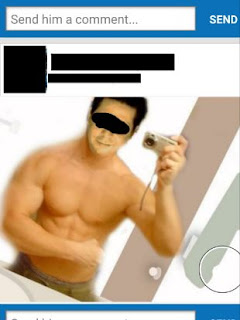 How about some bad photoshop?


Then there are the large number of people that have certain words in their name.
The most popular are LOVE, BIG, and GOOD. 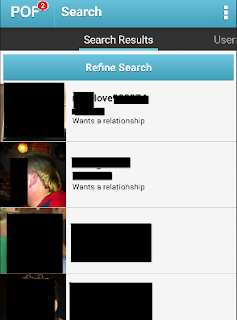 That guy up there is proud of that weird mullet thing. 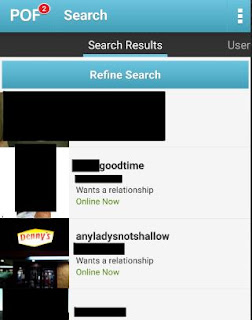 I found that I was just not good at online dating. Really not good at it. My profile was straight up honest. Brutally honest. I figured it would cut out people that were too serious as it just wouldn't work.  In doing that I received a lot of "your funny" type messages.  Yeah "YOUR"  That is a HUGE pet peeve for me. Not knowing the difference between YOUR and YOU'RE.  I started correcting grammar in those messages and responding with "I'm funny what?" and then explaining to them what they meant to say and that they were old enough to know better.  As you can imagine, I did not get many that responded back to me. I also would message people and tell them what photos were their best for their profile or comment on their stories.

I lasted about a week with having an online profile and browsing.
Posted by Brain Blobs and Verbal Vomit at 8:37 PM 0 comments