a smidge of karma perhaps?

Those of you who know me or are familiar with my blog know that I have been going through a divorce which has now been going on for over a year.


I have been separated from my husband for 14 months and divorce has been pending for over 10 months. I am sure that I am not really supposed to discuss details of what happened and such since it is pending...but you can read how I announced it back here to give you a little idea.

I just want to do a tiny bitch about how this hasn't been fair. It isn't fair that this is still dragging on.  It isn't fair that I have two days this month that are completely screwed up where I have to deal with court stuff.  It also isn't fair that I am now being harassed by a weirdly jealous soon-to-be-ex-husband...STBEH? That is just too long and a stupid abbreviation. Maybe there is another name that could be used. 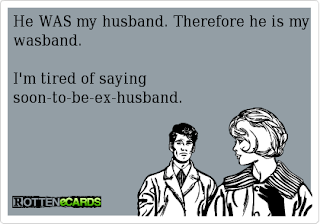 FOUND IT!.  Wasband.  Anyway, I mentioned weirdly jealous.  That is all I can come up with. My wasband is jealous.  See, he found out that I am dating.  While going through this divorce BS, I started seeing someone and now it is just eating up my wasband inside.

Last week started the flood of harassing texts.  Texts that were accusatory.  Texts that called me a liar. Texts that were utterly ridiculous considering all of the facts.  Tonight with him bringing back my child is when the snide comments started.  Snide comments in front of our four year old son.  This is unacceptable.  Unacceptable to act like a jealous child in front of your child and definitely unacceptable to act this way in MY house, my house that I don't even want my wasband in, but to show my child that I am a bigger person and can handle myself as an adult, I allow exchanges to take place in my home.
I guess somehow the wasband is using this to justify himself in some way.  Somehow if he can turn the relationship that I started while in the divorce process into the reason for our divorce, then the wasband was never in the wrong. Or maybe I am supposed to grieve this marriage and be a lonely widow forever.

This whole experience just makes it seem that I never knew him and he never knew me.  In spite of being in a relationship since 2004 and being married since 2007, somehow we are strangers.

One thing that I have struggled with is that marriage meant something to me. It was knowing that you had that person by your side that planned on being by your side until the end, your team mate, your person that was there no matter what -but what happens when you find out everything you thought was just a lie? That for years you were the only one that thought they were a team.  It is a crazy feeling.  That feeling of thoughts and ideas crumbling around you. I bitched a bit about this back here.

So my struggle for a good part of 2013 was when is it okay to date? Is there a rule?  Technically I am still married and it seems like I will be well into 2014.  I will admit that in the beginning, it didn't seem right. Like I am the one that is doing something wrong. But after a lot of working things out in my mind, basically what I have come up with is that I deserve to be happy.  There is no reason why I need to be alone the rest of my life or become the crazy cat lady.

I know there is a grieving period for the death of the marriage and all the other steps.  My marriage had been over for quite some time in the eyes of my partner and once I had come upon that realization, I was awoken at once and did not grieve anymore on something that wasn't even real. It was a waste of time and that was over a year ago.  I was lucky in finding out so soon after the separation how he really felt about me and the marriage. That closure allowed me to move on and concentrate on being the best mother I could be to my child and making sure I did everything in my power to make sure that my child was surrounded by positive energy.

There are so many things to think about when you start dating someone and even more so when you think about how that person might feel about you still being in the divorce process, having a child that lives with you and how that would effect the child.  So much to deal with and believe me, I have thought out everything.

Still, me stressing out over starting a relationship after marriage probably isn't as stressful as all the sneaking involved in starting one during a marriage.

So is this new harassment from the wasband jealousy? Is this karma coming around in some way?  I really don't care.  I am happy.

Posted by Brain Blobs and Verbal Vomit at 7:36 AM