Pay attention to your children

I haven't really written a good blaring rant in a while.  This is because most things that are getting me fired up lately I can't really talk about...but here is something that had been bothering me and I realized the other day I didn't have to witness it anymore.

PARENTS TOO CONSUMED IN THEIR TECHNOLOGY TO PAY ATTENTION TO THEIR CHILDREN. 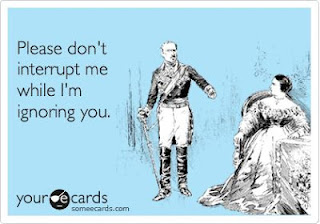 I know I will see this again.  This isn't a problem that suddenly ended, but the ones I have seen I have thought were the most ridiculous.

These places provide services for children with special needs and in most cases, these children have greater needs than my child.

The actions of the parents left me in disbelief.  Watching parents come in, plunk their kid with the toys, and then pull out their phone/tablet and then put in ear buds.  What?  You can't even watch and listen to your child play for 10-15 minutes and see how they interact with other children?  The appointment will be for an hour.  That is one hour where you can do whatever you want on your phone/tablet.  You are in a place where you are bringing your child for services because you cannot provide them - but maybe part of the problem is that you need to pay attention to your child.

I have watched children try to get their parents attention.  I have heard them say "Mom.  Mom. Mom. Mom. Mom." without getting an answer.  I have watched children push and hit each other without anything being said by parents because they were too self involved.  I shouldn't have to act as referee to other children. I shouldn't be the only parent talking and interacting with my child and the other children.

I can't imagine the difficult times that some of these parents have and they probably cherish every free second...but HEY PARENTS, YOU ARE NOT FREE UNTIL THAT CHILD IS IN THEIR APPOINTMENT.  Until then at least try to look like an attentive parent to at least fool the doctors/therapists/other parents.

I was at a pre-surgery appointment for my child in January and watched a parent plunk his child (who had Down Syndrome) down at a table that had broken magnets to play while he got out his ipad and started playing a game.  I watched that child get frustrated because the magnets wouldn't work.  I helped that child find a working magnet so he could drag the cars around on the table.  Did that father notice?  NOPE.  His child was unable to express his problem with getting the magnets to work and his father couldn't be bothered to pay attention to that fact.

Since doing all of those appointments for months, I have been able to get my child into a school where he receives all of his services in a classroom setting.  This is much better for him being in a class with his peers and learning rules and schedules...so much better than driving so many places all the time and him (and I) being stressed.  With this new school, I don't have to sit and witness these parents. WHAT A RELIEF.

Now am I saying I am a perfect person? No.  I love my technology and friends will attest that I seem to live on FB/Twitter/G+ -- but my child is not ignored.  I share a ridiculous amount of pictures and videos with family all across the US through social media.  We do a crazy amount of crafts and play time.  Most of my time online is spent when my child is sleeping or visiting with his father.  What is going on right now while I write this blog?  He is watching Cars for the 5 millionth time and acting out the scenes with his Cars toys (Disney owns my soul) and has instructed me to get out of the living room.  I will give him an hour of this independent play before I go in there and try to play also.  Usually he allows me to join if I build a racetrack for the Piston Cup.

All I am saying is think about what you are doing.  I am pretty sure that a fair amount of criminals come from some sort of background where they were ignored as a child. Children act out to get attention.  Children do bad things when they don't learn right from wrong.  Be there, show them that they are the most important thing in your life, and help them to go onto learn and do great things.  Show them manners/etiquette and teach them how to act in the world.

Look at the tweens/teenagers of today.  Right now we have a generation of children that are socially awkward because all they know how to do is text and message.  Throw them into a social situation and they don't know what to do.  There is no speaking, there is no respect for elders, and there are no common courtesies which would be expected.  So if this is our tweens/teenagers, what will the younger children be like now that mommy and daddy can't be pulled from their smartphones to pay any sort of attention at all?

Alright, I am getting off my ranty soapbox now.  Time to go play Cars with the child. I hope he lets me be Mater.

Posted by Brain Blobs and Verbal Vomit at 9:33 AM 0 comments