This isn't my usual stuff and it sort of reads as an elementary school report because it is about a cat, but it has been swimming around in my head this week so here goes...

I have always loved animals over people.  The unconditional love and loyalty is amazing. My pets were my number one love in life...that is until I had a child.
I think sometimes being an adult sucks, and making the decision to let go of a pet is probably the suckiest I have had to deal with and I have immense guilt even though I know deep down that it was the right thing to do.

I had to make that decision for Miss Nutty on Tuesday.  My memory has escaped me for the date that I had gotten her.  I want to say it was the year 2000ish.  She was a little gray tabby with huge ears that came from a litter of barn cats.  At the time we thought she was a he and named her "Mr. Nutty" after the snowman in the Pokey the Penguin web comic.  Man, looking at these "comics" brings back simplistic hilarity.  If you are not familiar with Pokey the Penguin, you can check out the Wiki and search for the comic.  I could not get the yellow5 page to load so I am not even sure if they are still out there.

Anyhow, after the first vet visit we found out that our Mr. was a Miss...so Miss Nutty she became.  She was a fun cat.  She was pretty smart and learned to play fetch just like my dog Oscar (who I lost in 2007).
Miss Nutty was always a friendly cat and never had a problem with any other animals that came to visit or stay.  She did however develop a problem with kidney stones and had a surgery in 2006 to remove one the size of an almond (which the vet said was quite rare in female cats..so of course I would have a pet with a rarity).  Special food was on the menu from then on.  It seems that became the start of her downhill journey.

When I was pregnant in 2008/2009 she developed a severe allergy to fleas.  Not that I like having fleas in the house, but it happens when you have a dog that goes in and out AND have a neighbor that has an overgrown yard and excess number of dogs...so the occasional flea would get in.  She actually clawed/chewed a hole in her side to the muscle.  So then the war on fleas started.  Soon after that incident, she started to have issues getting around.  It seemed like she was having issues with her hips and she didn't seem totally right in the head.  She couldn't get to her litter box in the basement quick enough and messes started happening.  Anyone who has been pregnant knows the fear of toxoplasmosis. My husband worked late nights so it was me dealing with the mess.  Imagine a pregnant woman wearing a face mask and gloves cleaning up cat messes.
She got really bad and I confined all the cats to the basement for a while (it was only fair to confine them all). I even tried to make a crude pen for her to keep her messes in one spot.  It progressed to where we ended up getting her an extra large pet crate (I think it was meant for Great Danes).  It had a divider that came with it so you could use it for more than one dog, I used that divider to make a second level for her.  Miss Nutty lived in the crate for years.  I tried letting her out in the beginning every now and then to see how she would do.  She seemed to have even more difficulty getting  getting to her litter box in time so back to the crate.  She got to where she no longer groomed herself so I tried kitty wipes, no water shampoo, and brushing to help with her.  Then when she started chewing her hair, I would cut those matted clumps out.  I am pretty sure she wasn't all in there, so she kind of lived up to her name.  She had a blank stare, but she seemed to smile while she purred as I cleaned and brushed her. Her messiness became worse and worse and with all that is going on in my life right now, I needed to let go.  This wasn't a life for her and she was not going to miraculously get better.

Making the decision to let go was hard. There is no checklist to let you know you are making the right decision.  Why isn't there a hotline to call so that someone else is making the decision?.  Calling the vet to find out when I could bring her in, blubbering on the phone while getting details. Eek, the car ride there with her meowing.  Blubbering in the vets office (thank goodness they just ushered me into a room right away).  The leaving with the empty pet carrier...then the eerily quiet car ride home.  I spent the evening crying - shit, I am crying now.  This I guess is what helped me along to the sinus infection I have.  I think the cold I was fighting off did not have a chance once my emotions flooded and clogged my sinuses.  So now I have spent a few days laying in bed and coughing up my lungs.

Yesterday I received a card from my veterinarian with the nicest hand-written note that made the waterworks start again. I guess it was sort of bad timing with this being the first Valentine's Day since my path changed and it being a day where my child was with his father.  I know there have been worse Valentine's Days in the history of the world...fortunately I had my queue of bad movies and friends online to help me get through these last few days.

Posted by Brain Blobs and Verbal Vomit at 9:01 PM 0 comments

Don't you need a little hat for Mardi Gras? 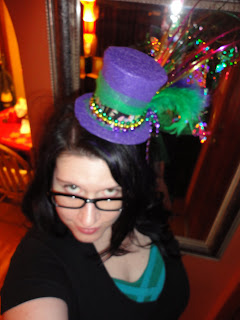 I work this weekend and wont be able to attend the Mardi Gras festivities in St. Louis, but that is no reason to not have Mardi Gras fun and silliness!  I made these hats for me and a co-worker to wear at work Saturday!

Seriously you can make this super cheap.  Felt from Michael's is on sale this week and so is their Mardi Gras merchandise (60% off!).  Maybe it is because I have made lots of hats over the year, but I am getting really quick at these.  I think total I spent an hour on both of them, but a little hard to judge because I was playing on G+ also.

I am sure you also have beads or feathers or something from a previous Mardi Gras to incorporate as well.

I found a bag that had fabric from 5 years ago when I made costumes for my and my friend's dogs for the pet parade.  I totally have Mardi Gras print fabric scraps in there as well as feathers and miscellaneous beads!  With the 2 picks from Michael's that were 60% off and the pieces of felt, I think making these two hats cost me $3!

$3!!!  It helps if you are a crafter and keep all of your scraps and have lots of doodads on hand! I had green tulle from the St. Pat's hats (which you might find a few more steps in the hat tutorial there), and some extra headbands from the last time I made hats.

This will be my usual "Red Solo Cup" hat style. 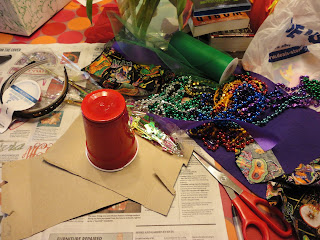 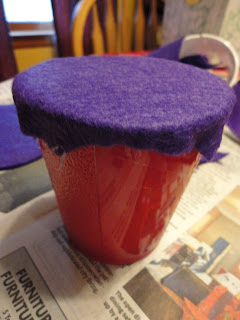 This time I tried something new and glued the felt over the top portion of the hat.  It ended up making the seam around the top of the hat look really nice. 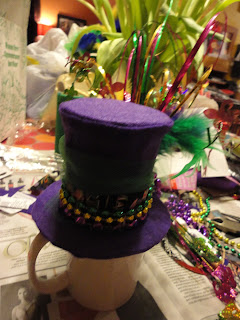 You should know the drill by now (if you don't check this one out), cut out cardboard glue on cup, cover in felt, cut out brim, cover with felt, glue together ---THEN EMBELLISH THE SHIT OUT OF IT! 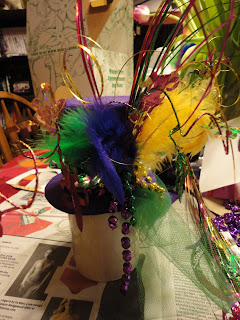 Mine is done, now onto the second hat!  This smaller one I used a cup I normally use for Jello shots.  I did the hat the same way as the Solo cup hat.  I used the fabric scraps on this one. 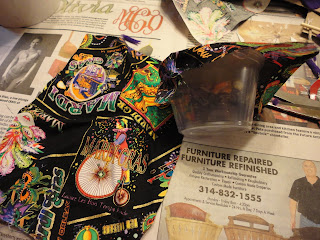 How fun is this Mardi Gras fabric?  Imagine it being a halter dress with a tutu on a Dachshund puppy, because that is what the rest of it was used it for 5 years ago! 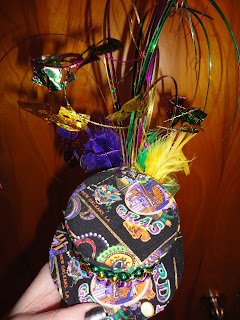 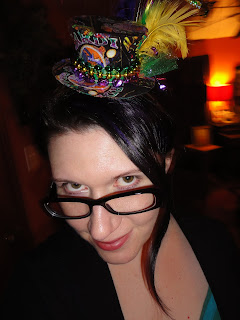 Posted by Brain Blobs and Verbal Vomit at 9:34 PM 0 comments

This is my 100th post.  I was working on a project for a post but thought first I should address the fact that I have published 99 posts and didn't want my 100th to be a silly hat (yeah people, another tiny hat is coming).

I am pretty sure that I would have hit this mark back in October had my life not taken a different path.


I started this as an outlet for my thoughts and a way to share my inexpensive projects that I work on.  I miss sharing all of my thoughts (there have been lots swimming around in my head).  I am not sure if eventually I will share all the happenings on here or if I should just start a new blog to help others cope and make lemons out of their lemonade.


Anyhow, I thought I would share my top ten posts.  I know the numbers may not seem high for most of you bloggers out there.  Take into consideration that FB doesn't allow many people to see the links, not very many of my friends/family read my blog (maybe only 20 of you), and most of these are people that have found it via google searches or pinterest - so actually the numbers are pretty amazing to me. 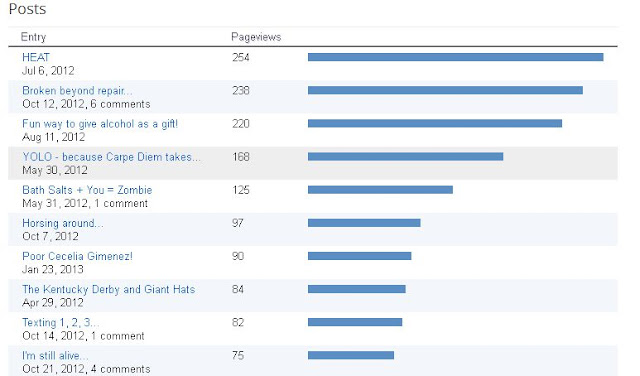 Anyhow, thanks for reading my blog and seeing what I am up to!
Posted by Brain Blobs and Verbal Vomit at 10:07 AM 0 comments