Do you have an old pair of boots that you have worn to their death?  Well, why not try something crazy with them before trashing them?

I had worn this black pair for probably three years and they were toast.  The fake leather was scuffed so bad that I just couldn't wear them anymore. 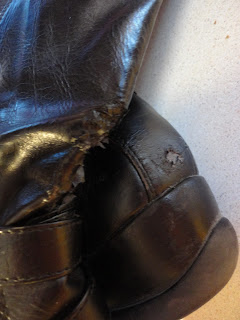 Can you see those scuffs and gouges? 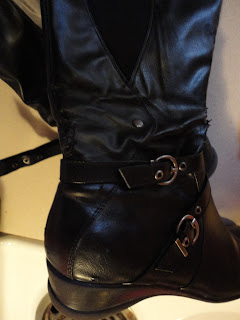 The scuffs and gouges were on both boots and mainly around that strap that goes around the ankle.
So what to do with my old friends?  Why PAINT THEM of course.  Why not.  I am not sure the exact thing that made me have this idea, but during the thought process I remembered that I had a shirt from Old Navy that had a gold sequined reindeer...so checking my paint stash I found that I had some gold, brown, wood tone, and clear coat.  This boot painting was going to happen! 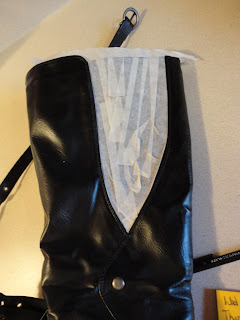 My boots had an elastic panel that I wasn't sure how the paint would take or if it would flake off...so I just taped this off. 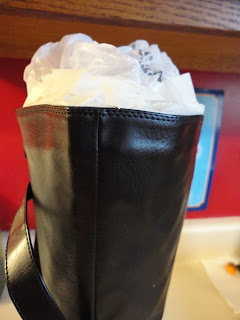 I stuffed the boots with paper to make them stand up and then taped around the inside and put a plastic bag in the top to keep paint out of the inside. 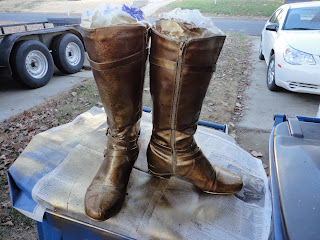 Of course I didn't take pictures of the paint layering process...but here is the end result.  The gold was so GOLD which is why the brown was added over the top.. The brown paint was a Rustoleum brand and the nozzle kind of splattered the paint.  Oh well, the effect was pretty cool.  I went over with the wood tone paint (which was a floral paint) and then put a clear coat on top.

I wore them for a good 12 hours the next day and they actually didn't do too bad.  The gold wore away around where the boots crease...but nothing that a quick touch up couldn't fix if I wanted to wear them again..

Posted by Brain Blobs and Verbal Vomit at 8:04 PM 0 comments

It is December and yes my friends, I am still alive!  Everything is great with me for the most part so don't worry.

Just thought I would surface to share a few little Christmas keepsake projects for Christmas...

Since my child was born I have tried to incorporate something with his hand prints into my Christmas decorations.  I think the thought process in this is that I figured I wanted to make myself cry like a baby in the future while unpacking all of these at Christmas and say things like "oh look how tiny his hand was!" 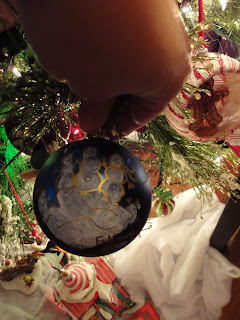 2009 was his first Christmas.  His little hand painted white and slapped on an ornament makes those pudgy fingers into snowmen sitting on a pile of snow.  Just outline and draw faces on them.  Add a little clear coat and don't forget to put the name and date! 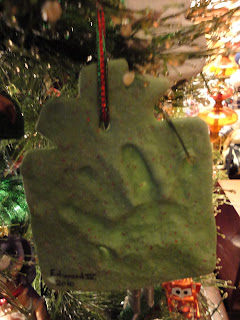 2010 I tried my hand at making dough ornaments with his hand prints in them. Yikes what a mess that was.  It seemed that little hands want to squish up the dough instead of making a perfect hand print for me to have forever.  Lots of do-overs on that project. Clear coat when finished and don't forget to put name and date on the ornament! 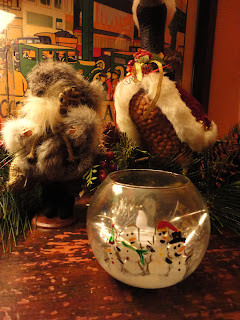 I also did this one in 2010.  Same principal as the 2009 project with the hand making the pudgy snowmen...but I put them on a round votive holder and added color.  Is it too repetitive that I say to add clear coat and name/date? 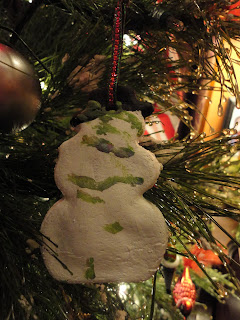 In 2011 I didn't actually do a hand print.  I regretted that when I was decorating the tree.  Instead I made ornaments that I let my son and his cousin paint and give out as gifts.  Don't forget that clear coat and there is plenty of room on the back to write a nice message plus name and date!  I have several painted ornaments in different shapes that I will treasure forever..or until they break or disintegrate. 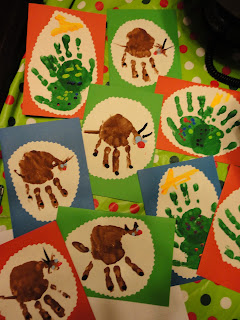 We made Christmas cards.  It incorporated his hand print AND his artwork as he got to paint his Christmas trees and his Rudolphs.

I am hoping he will allow us to do another round of cards, otherwise I may have an angry mob of people on my Christmas card list that get a regular old card!

I plan on having him make me a tree and Rudolph on canvas for me because they turned out so stinking cute.

I didn't take before or during pictures for this year's project so I will just tell you what I did.  The trees used both hands and the Rudolph is only one hand.  You do one hand at a time and wash that hand in between because toddlers tend to get paint where you would least expect it.  Then when those are dry, put the other colors you want to use for painting the trees or Rudolph on a plate and have a cotton swab for each color.  I did the tree colors on one plate and the Rudolph colors on another to prevent mixing and confusion.  When dry I cut them out with the pinking shears and glued on colored paper.  Then print out whatever you want to say on the inside.  If he allows me to do another round of cards, the trees might only use one hand.

Who wouldn't want this cuteness in their mailbox?


Posted by Brain Blobs and Verbal Vomit at 7:49 PM 0 comments