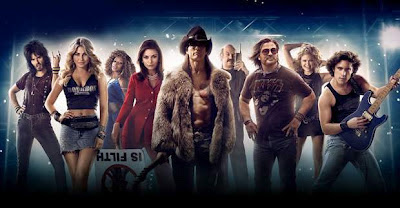 When I say not a WTF, I mean not a Weekly Terrible Film - but it is kind of a WTF in the traditional sense as "WTF? Why didn't this do well?"

I went to our local $1 show (St. Andrews Cinema) last night and seen this movie.  Let me first start by saying that I was surprised it was already at the $1 show and out of the "real theaters" since it had only came out last month...

I thought it was FANTASTIC.

Let me tell you it was hard not leap out of my seat so I could dance and sing along --or was that because I had two large margaritas before hand?

I am guessing the marketing was bad on this.  It had to be.  Maybe it was released at the wrong time?  Maybe because they focused on Tom Cruise as being in the movie that might have been a turn off?  I didn't really like his character at all.  Yes, he performed well but he is not my favorite.

Okay, so just now I looked for trailers to link to this and none of the trailers were impressive.  In fact, NONE of them made me want to see the movie.  Seriously, the trailers for this were horrible.

H   O   R   R   I   B   L   E
I must have blocked these from my mind.  Good thing thing or else I probably wouldn't have wanted to waste the dollar.  You can look up the trailers if you want, but they either tried to cram too much in so it was a big hot mess of stimulation overload or else they were boring.  That marketing group seriously needs a good slap on the wrist for this one.  They blew it.

This movie had a lot of star power (besides the aforementioned Tom Cruise) there was also, Alec Baldwin, Russell Brand, Catherine Zeta-Jones, Bryan Cranston, Paul Giamatti, Mary J. Blige, Julianne Hough, Kevin Nash (you ladies might know him better as Tarzan in "Magic Mike"), Malin Akerman,  Will Forte,  and T.J. Miller (okay, not a shiny star...but I enjoyed him as Stainer on "She's out of my League").  Oh, I guess I should mention Diego Boneta.  He plays Drew which is one of the main characters.  He has done a few little things but I believe he is a shinier star in Mexico.

Also keep your eyes peeled for cameos...Constatine Maroulis as a record executive -yeah, not a cameo that I noticed but some of you might know him from when he was an American Idol contestant.  Did you know he also was nominated for a Tony Award in 2009 for his performance as Drew in this musical?

Toward the end look for Debbie Gibson, Kevin Cronin, and Sebastian Bach...OOOH, I found a clip on youtube of them..wish this clip was longer!
I love seeing actors in roles that are unexpected (like singing and dancing).  Sure Julianne Hough, Catherine Zeta-Jones, and Russell Brand have been in roles that required singing ( Footloose, Chicago, and Forgetting Sarah Marshall/Get him to the Greek respectively) and of course Mary J. Blige has sung a song or two (LOL) --but the others?  Tom Cruise wasn't bad, but it made my night seeing Alec Baldwin singing.  SPOILER ALERT -It really made my night at a sad moment in the movie when Dennis (Alec Baldwin) feels all is lost with his club and his employee Lonny (which is played by Russell Brand) starts singing REO Speedwagon's "Can't fight this Feeling" to him, and it becomes a beautiful (yet comical) duet.  Seriously my chest was hurting from the laughing - not that I thought it was funny that their characters found love, but because they seemed an unlikely pair and their actions while the duet. Oh here, I found the song on youtube...oh I wish there was a clip from the movie and not just the song!
There is also hilarity when they touch on the introduction of boy band craze - man, I had totally blocked out the bright colors and ridiculous outfits with the funky fresh dance moves.  Don't get me wrong, I did love my NKOTB - it is just weird (and hilarious) now seeing it introduced.

I think that I may have to go see this at least one more time while it is at the $1 Show - in fact, I might even say that I have to own this movie when they release it on DVD...which info on the internet points to September/October DVD release date.  Maybe this will stay at here for a bit then.  Fingers crossed (because with their 4pm and 9pm showings, it will be hard to get friends to see this through the work week).

Sure, I can see why you wouldn't want to take my word for it since I am addicted to watching bad movies.  So find out for yourself if you are anywhere near St. Charles, MO and can spare a $1(This is also playing at the Keller 8 but it looks like they are $4 there).

Posted by Brain Blobs and Verbal Vomit at 5:52 PM