In my posting on the World Series Trophy Hat last week, I had mentioned posting about my St. Patrick's Day hats. 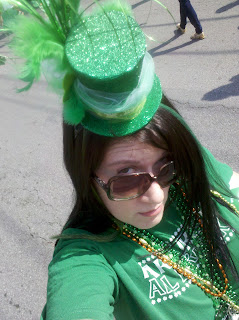 I made these using red plastic cups and old CDs.
Supplies


I cut off the top of the cup and glued on a piece of cardboard, then covered with felt.  I used old CDs (yeah, someone has Tax Cut 2007 and I know there was an old copy of Deus Ex in the mix too) because I am not great at cutting perfect circles and I was making several hats.  I melted a few holes in the CD to feed the pipe cleaners through for attaching to the headbands and then covered with felt also. I tried various felts and glitter craft foam.  The plain old felt worked the best.  The bottom portion of the cup is what I glued to the base so that the top of the hat was a little larger.  I thought this gave a whimsical look. 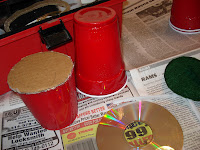 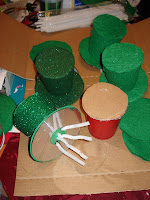 Then you can decorate with various ribbons, tulle, feathers, etc.  I made 7 of these for our group to wear in Dogtown for St. Patrick's Day and they were all a little different. 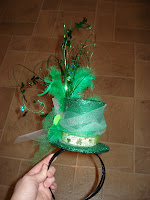 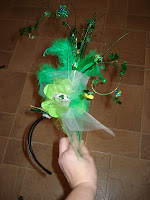 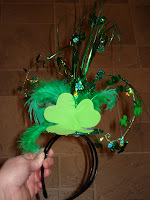 I wore mine with the decoration toward the back, but they can be worn either way.

It is going to seem that all I do is make crazy hats, but I am probably going to put another hat posting up in a week or so for making a big Kentucky Derby Hat.

Posted by Brain Blobs and Verbal Vomit at 8:14 PM